The American Lung Association's State of the Air Report reveals the U.S. cities with the cleanest air. According to data from 2015 to 2017, all of these cities had zero days when ozone and particle pollution reached unhealthy levels. If you want to enjoy some clean, crisp air on your next stateside vacation, consider one of these cities.

The city of Bangor in south-central Maine ranks 23rd for cleanest U.S. cities for year-round particle pollution and also had no days with unhealthy levels of ozone or short-term pollution.

Bangor's success, unfortunately, isn't replicated throughout the state, which has one of the highest rates of asthma in the country — approximately 10% among adults and 11% among children. Experts suspect that a critical factor affecting the state's pollution levels is contaminants sweeping into the region on ocean and air currents from upstream urban areas.

In Bangor, however, you can breathe freely. Work your lungs with a hike through nearby Acadia National Park or take a more leisurely stroll along the city's Penobscot River Walkway.

Lincoln ties with Bangor at 23rd for year-round pollution with zero days of unhealthy ozone and short-term pollution.

If you find yourself in the Midwest, take advantage by visiting some of its many outdoor attractions. The Sunken Gardens, recognized by National Geographic as one of the 300 best gardens in North America, are full of vibrant year-round flora. Meanwhile, the Pioneers Park Nature Center boasts hiking trails with informative exhibits on the area's ecology. You'll also find information on the factors that contribute to the city's fresh air.

If you're in Beatrice, you'll want to visit the pristine Homestead National Monument of America, where you can hike among the prairie grasses and browse the outdoor exhibits depicting the history of American homesteading.

Finally, the Lincoln–Lancaster County Health Department has monitors that provide air quality data to residents so those with respiratory conditions can stay safe and healthy.

Wilmington, North Carolina, is another city to be congratulated for its air quality. Known as the Port City, Wilmington is recognized for everything from its nearby beaches to the country's largest movie studios outside of California. The city is also home to the U.S. Coast Guard's Diligence vessel.

Wilmington's residents have benefited from statewide environmental initiatives such as the 2002 North Carolina Clean Smokestacks Act. The city's air also got a boost when Duke Energy, the regional electricity provider, converted the energy source of its Wilmington–adjacent plant from coal to natural gas.

If you visit Wilmington, you'll want to take advantage of its nearly two miles of Riverwalk along Cape Fear River. The pedestrian boardwalk also connects to the Sea Bikeway and East Coast Greenway.

Tied with Wilmington for the 13th lowest year-round pollution — and the same zero days of dangerous ozone or short-term pollution — is the metro area of Palm Bay–Melbourne–Titusville in central Florida.

The region is also known as the Space Coast, due to the presence of the John F. Kennedy Space Center and Cape Canaveral. Anyone interested in the history of our solar system will enjoy visiting the Space Center with its interactive tours and exhibits. You'll breathe easy knowing that all that rocket exhaust hasn't overwhelmingly increased pollution in the region.

Meanwhile, enjoy more clean air at the renowned Cocoa Beach or browse the wildlife at Brevard Zoo. You can also explore the various downtown districts, each of with its own unique character and the same pollutant-free atmosphere.

In 2015, Burlington became the first American city to run entirely on renewable electricity, which has undoubtedly played a role in its clean air success. Along with biomass, solar, and wind power, its largest energy source is hydro, thanks to its use of dams and its location on Lake Champlain.

Burlington also has an ongoing "Great Streets Initiative," a municipal project aimed at enhancing the city's sustainability. From a new City Hall Park to improved bike lanes, the various changes make Burlington a vibrant place to visit and explore — with the added bonus of pollutant-free air.

Tied for the lowest year-round particle pollution, in addition to zero days of dangerous ozone or particle pollution levels, Honolulu has some of the cleanest air in the country. While the Hawaiian islands are known for their natural beauty, what is remarkable is that the state has managed to preserve its fresh and vibrant atmosphere even in its urban capital — and largest city — of approximately 350,000 people.

Despite its favorable ranking, however, Honolulu's air quality has suffered dramatic swings thanks to the existence of "vog," the island term for volcanic smog. When Kilauea erupted on the Big Island in 2018, winds spread the resulting sulfur dioxide to other islands in the archipelago, including Oahu, on which Honolulu is located. When vog levels are high, residents — and visitors — can experience symptoms ranging from eye/skin irritation to coughing, headaches, and fatigue.

However, when the winds are favorable, the islands do indeed have the best air in the country. The city's outdoor attractions are also perfect for visitors who prize clean air and pristine environments. From outdoor gems like Waikiki Beach to the Honolulu Botanical Gardens, this beautiful Hawaiian city certainly offers plenty of value for all tourists. 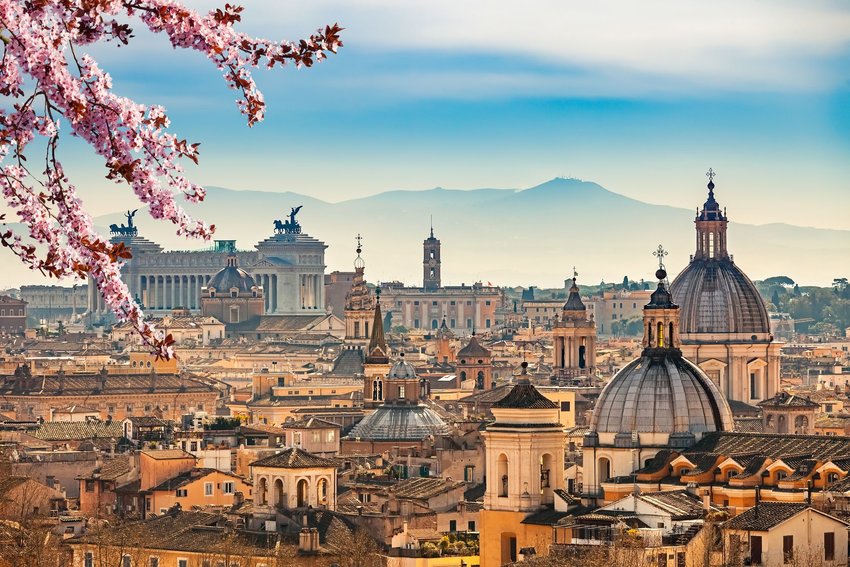 Rome is such a popular tourist destination that many know quite a bit about the capital of Italy. But even if you've toured the Colosseum and tossed a coin in