Boston was the first New World city to defy the English Crown. And, when colonists dumped 342 chests of tea into the harbor in 1773, their actions set off a chain of events that led to the Revolutionary War. Today, Boston is the 10th largest metropolitan city in America and one of the most popular tourist destinations in the world. Of course, there's much more to Boston than just the Tea Party. Here are nine things you never knew about Boston.

Locals call the 1,100-acre chain of parkland surrounding Boston the "Emerald Necklace." The nine parks within are connected by a series of walkways and waterways. The preserve also includes the famous Boston Common. There, more than 1,000 British Revolutionary War soldiers and patriots from the Boston Tea Party are buried in the Central Burying Ground. Given the history, it's no wonder the area is a hotspot for ghost tours.

Walkers and joggers can be found traversing the 1.5-mile path around Jamaica Pond in the summer. The Boston Public Garden is also a popular summer destination. Meanwhile, the Boston Common Frog Pond is a favorite with ice skaters in the winter. If you're a nature enthusiast, you'll love the 527-acre Franklin Park, the largest in the Emerald Necklace. The park also hosts its own zoo, which is open seven days a week and features exotic creatures like African lions and green anacondas.

You won't find Happy Hour in Boston. Under Massachusetts law, it's illegal for any pub to serve Happy Hour discounted drinks. But, for those who want to kick back and have a cold one, Boston has you covered. There are many great breweries and bars to visit throughout the city. In fact, its best pubs offer more than just craft beer; they serve some of the best pub food you'll find in the Northeast.

If you're up for it, sign up for a tour of the Samuel Adams brewery, a must for any Boston visitor. For an even more engaging experience, head over to the Beantown Pub. It's the only place in the world where you can drink a Sam Adams beer while gazing out at Samuel Adams' resting place on the Freedom Trail Burying Grounds. Boston is also home to Trillium Brewing Company, which was listed as the third-best brewery in the world in 2019.

A Transportation Quarter-Stack Sits Over the Charles River

Locals say the Boston University Bridge is one of the only places in the world to see a "boat... sail[ing] under a train running under a car driving under an airplane." This state of affairs is possible because the Grand Junction Railway Bridge lies directly underneath the main bridge carrying Route 2 from Boston to Cambridge.

Boston Is the Land of Many Firsts

Because of its storied history, Boston is home to many firsts in the United States. The first lighthouse was constructed in Boston, along with the first chocolate factory, subway, public beach, library, and elementary school. Plus, we've already mentioned the first public park — Boston Common.

But, let's talk about the first lighthouse in America. That would be Boston Light, which illuminated a safe path to Boston Harbor until 1776. The British blew up the lighthouse before vacating Boston, but it was rebuilt in 1783. Today, the lighthouse still stands and is the second-oldest working lighthouse in the United States.

And, if you want to visit the first public beach in America, head to Revere Beach, where you can enjoy water sports and attend the annual International Sand Sculpting Festival in July.

A Molasses Flood Once Engulfed Parts of the City

In what became a very sticky situation, a large storage tank of molasses burst onto the Boston waterfront community in 1919. Two-million gallons of molasses rushed through the streets at speeds of up to 35 miles-per-hour. Today, you won't find a hint of molasses on the streets of Boston, but Bostonians still enjoy plenty of molasses in their baked beans.

Boston's laws date back to the time of the first Puritan landing. Although many of those laws remain on the books, they aren't enforced. For example, it's illegal to take a bath in Boston without a doctor's prescription, but it's also illegal NOT to bathe before bed. Meanwhile, goatees require a license to wear, and it's illegal to eat more than three sandwiches at a wake. In addition, roosters can't enter bakeries, and gorillas must never ride in the backseat of cars.

The Biggest Art Heist in History Occurred in Boston

In 1990, a group of unknown robbers pulled off the largest art heist in history at Boston's Isabella Stewart Gardner Museum. The thieves tied up the museum guards and made off with about $500 million dollars worth of art by Vermeer, Rembrandt, Degas, Manet, and Flinck. They were never caught and the stolen items were never found.

Boston is home to more than 50 museums. If you're a history buff, this city should keep you busy for a while. You can see Egyptian mummies and Impressionist art at the Museum of Fine Arts or catch interactive dinosaur displays at the Museum of Science. Whatever you do, don't miss the Harvard Museum of Natural History, where you'll see mounted wildlife specimens from all over the world.

A Great Fire Once Leveled Boston

One of the worst fires in history, the Great Fire of Boston occurred in 1872 and destroyed 770 buildings. Luckily, Boston established America's first fire department in 1679, so efforts to stop the fire proved successful. About 1,700 firefighters from Boston and the surrounding area showed up to fight the intense blaze. Fortunately, they were able to save most of the civilians in the city. For more about the Great Boston Fire of 1872, head over to the Boston Fire Museum.

When the Puritans first established Boston, it was located on a small peninsula spanning just 800 acres. However, as the colony grew, the need for land intensified. Using fill from neighboring regions, residents extended the original shoreline. Today, you can see how Boston has grown by using this USGS (United States Geological Survey) tool to see historical maps of the city.

While those stateside may cross their fingers or hang a colorful rabbit's foot from their keychain, those elsewhere follow different routines when searching for a bit of good luck. Here 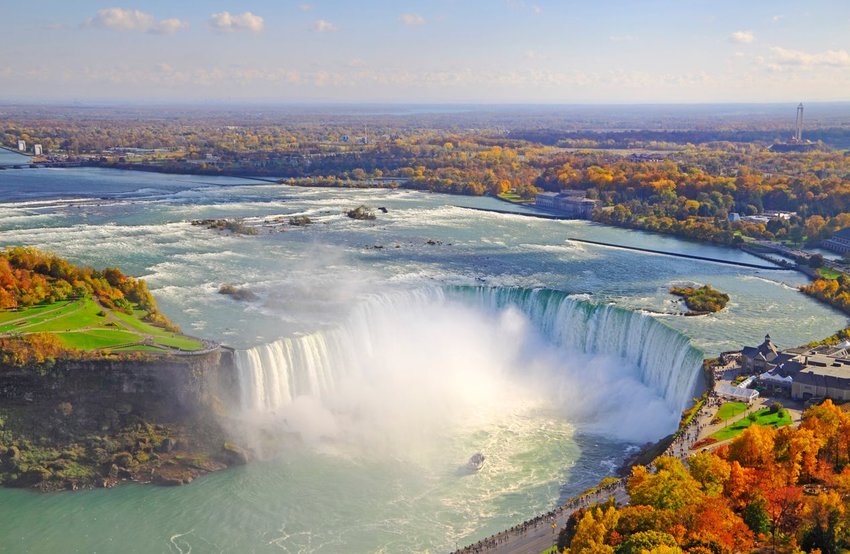 We know there are questions around travel amid the coronavirus (COVID-19) outbreak. Read our note here. Niagara Falls is one of the most well-known natural landmarks in North America. Located