Sales taxes account for 30.1 percent of overall revenue at the state level. Unlike income taxes, which are managed at the federal level, sales taxes are handled by each individual state, which means some states don't impose sales taxes at all. Here are the only five states that currently have no sales tax.

Alaska is one of only two U.S. states without sales or income taxes. But, while there is no sales tax at the state level, local governments throughout Alaska have the right to impose taxes at their own discretion, and there are some areas of Alaska where a sales tax is charged on certain items.

You'll need to pay attention as you travel through the vast state, as the taxes can be somewhat unpredictable as you do. If you're in Anchorage or Fairbanks, you'll pay no sales tax; if you travel to Juneau, you'll pay a five percent sales tax on any item you purchase.

We're jumping straight from the largest U.S. state to one of the smallest — Delaware is the second smallest state in the U.S., measuring in at just 96 miles long. Unlike Alaska, Delaware makes up for a lack of sales tax by imposing fairly high income taxes. In fact, this little state has the 17th highest income tax in the nation. Delaware also relies heavily on excise taxes, which are taxes imposed on specific types of goods, services, or activities. For example, while there is no general sales tax, there are taxes on cigarettes, alcohol, and gas.

One interesting facet of Delaware's tax policy is its impact on the art scene. Art collectors and dealers often work here in order to avoid the high taxes imposed on art sales in other states. This appeal is part of what allows the state to continue not charging sales tax; businesses will often register in Delaware to avoid sales tax, meaning that the state gets a good amount of its revenue from corporate taxes instead.

Montana may be nicknamed the Treasure State, but this moniker comes from its many mineral reserves, not from the money it rakes in from sales taxes. In fact, a significant portion of Montana's tax receipts come from the taxes corporations need to pay when they mine in this state. The other biggest tax charge in Montana is income taxes.

Unlike most other states, individual jurisdictions in Montana cannot choose to collect sales taxes at their own discretion. Instead, Montana makes use of what is known as a resort and local option tax, which is a sales tax implemented in areas with a lot of tourist traffic but a low population. This type of tax, which affects lodging, restaurants, and recreational facilities, enables small towns to support large influxes of tourists without raising taxes for permanent residents. Only cities with populations of under 5,500 are allowed to use this tax — but given that Montana's population density is just seven people per square mile, many areas meet this qualification.

Along with Alaska, New Hampshire is one of the two states with no sales or income tax. The majority of New Hampshire's tax receipts come, instead, from its property taxes, which are the third highest in the country.

In addition to its high property taxes, New Hampshire makes heavy use of excise taxes. Like Montana, local governments in New Hampshire cannot choose to charge sales taxes. Instead, the state as a whole taxes beer, electricity, tobacco, and gasoline. There is also a nine percent sales tax that is always charged on restaurant bills, car rentals, and hotel lodging. In addition to all of this, New Hampshire charges a 10 percent timber tax for trees chopped down in the state — although Christmas trees, fruit trees, nursery stock, ornamental trees, and sugar orchards are all exempt from this particular tax. All of these taxes combined make up a large portion of New Hampshire's revenue.

Oregon is the most populous state on this list. Although it doesn't charge a sales tax, Oregon does make use of excise taxes on alcohol, tobacco, and phone services. Local governments throughout the state also impose sales taxes in certain jurisdictions.

Despite its lack of statewide sales tax, Oregon does charge heavily in other areas. In fact, this state has the third highest income tax rate in the country, something it relies on to meet budgetary goals. This has led to Oregon being listed as one of the worst places to retire.

Oregon lawmakers aren't actually all that happy about this tax situation. Throughout the second half of the 20th century, they have tried nine times to impose a sales tax — but all of these attempts were wildly unpopular among voters. Even one of the state's most popular governors, Tom McCall, was unable to discuss a plan for imposing a sales tax without getting booed. Present day lawmakers are still trying to get a sales tax going in Oregon — but for now, this state remains sales-tax free. 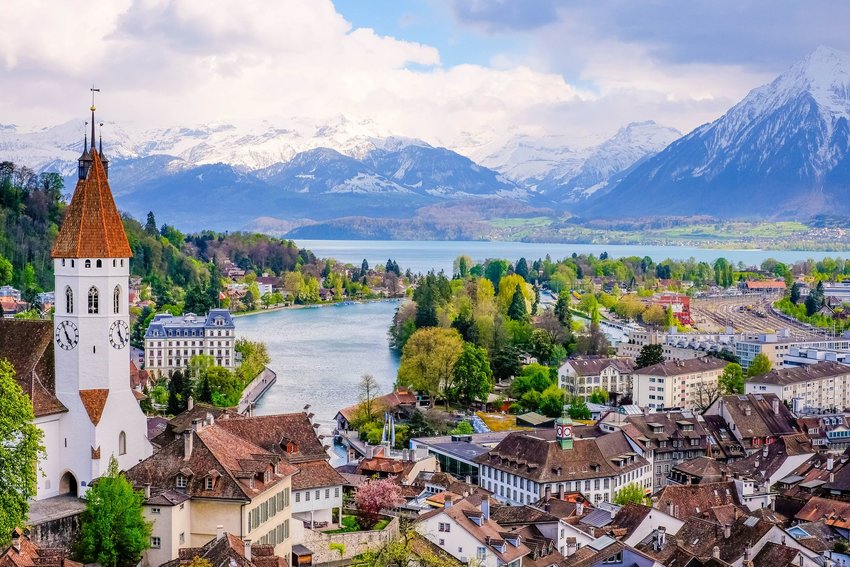 It's easy to draw a blank when trying to remember the capital of a country. There are around 200 of them, after all. While guessing the most populous city will

The type of cruise you go on can be a very personal decision. Everyone chooses their destination of choice based on several factors, from cost to the departure port location.