Wes Anderson's films are among the most distinctive in modern cinema, from the satisfying symmetry of the shots to the simple lines and colors that are part mid-century modern and part fairy-tale surrealism. You don't need to visit a movie set to see Anderson-esque locales, however. From Scandinavia to California, here are a few places so visually striking that they belong in his next film.

The Eastern Columbia Building in downtown Los Angeles was built to be the headquarters for a department store. But, with its blue face, gold accents, and Art Deco styling, we think it was built to be filmed by Wes Anderson. Can't you picture the clock tower centered in a series of shots, with the hands alerting us to the passage of time as the film progresses?

Constructed in 1930, the building was completed in just nine months. Despite the haste, however, the gold and blue terra cotta exterior has stood the test of time. It continues to reign as one of the city's iconic sights that has nothing to do with the film industry — until Wes Anderson makes use of it, that is.

With its colors and cobblestones, and an archway flanked by two symmetrical pillars and sloping roofs, the Kastellet, or the Citadel, is begging to be scouted for Wes Anderson's next piece. The fortress was founded in 1626, and, though the buildings are still used today by the military, the area is nonetheless open to the public.

The entire fortress forms a pentagon that is situated on a star-shaped island in the Danish capital. We know a star is more complex than the usual Anderson shapes, but we're optimistic he could still make it work.

A lonely pink church at the top of an Alpine village? It sounds like a place for a "Moonrise Kingdom" pageant with all the foreign intrigue of "The Grand Budapest Hotel." The pastel church with its towering belfry is familiar to anyone who has hiked around Mont Blanc. It is also the most notable sight in Trient, a village of fewer than 200 people.

The rest of the buildings in the village would make an Anderson-approved setting, as well, with their rows of identical windows framed by contrasting shutters. Of course, the surrounding Swiss Alps aren't too bad, either.

The Flam Railway offers a spectacular train ride through the fjords and mountains of western Norway. In addition to the pastoral scenes, the train takes you past Norwegian villages of muted primary colors and simple wooden cottages — an aesthetic we know Anderson would love.

Trains themselves are a well-known sight in Wes Anderson's films, from "The Darjeeling Limited" to "The Grand Budapest Hotel," and the interior of the Flam Railway train is a perfect match for his style. The passenger cars are full of wooden paneling and slightly old-fashioned seating.

Oh, those lines — we can already imagine the camera panning across the wooden grid of this library's interior to focus on some terse and unassuming character seated at one of the tables. The Grimm Zentrum Library, dedicated to the Grimm Brothers, is situated on the campus of Humboldt University in Berlin. Although it only opened in 2009, the building has the perfect aesthetic for any Wes Anderson film.

The Grimm Zentrum Library isn't only a striking visual treat, though. It's also the largest library in Germany, a country already long recognized for its wealth of literary history — from the Grimm Brothers to Goethe.

The town of Grand Marais on the shores of Lake Superior is home to a lighthouse, forests, and a wharf full of faded, colorful fishing boats. We're not saying Anderson needs to film a "Moonrise Kingdom" sequel here, but he definitely could. Catch a sight of deep crimson sails in the harbor, or picture a camera shot of one of the many nearly identical houses, with their clean lines and woodland backdrops.

Grand Marais sits just south of the Canadian border, on the largest lake in the country. It's an idyllic spot for anyone looking for nature and quaint, small-town charm.

At the end of a pier in Los Angeles' South Bay sits a whitewashed, octagonal building with a Mediterranean-inspired red tile roof and blue accents. Lamp posts and light blue railings frame the roundhouse, which is home to an aquarium. From the weather-worn colors to the shapes and symmetry, the Manhattan Beach site is begging to be the scene of some Andersonian capers.

The pier itself has been around since the 1920s and holds the title of the oldest concrete pier on the West Coast.

On the opposite side of the world, we have a far more ornate locale that still gives us the same Wes Anderson vibes. The Winter Palace in St. Petersburg, Russia, is on a list of things you may not know about Russia. It boasts an impressive turquoise exterior with rows of white columns and gilded adornments. We can picture a film here combining Tenenbaum-esque dysfunction with the Old-World luxury of a Budapest hotel.

From the old-fashioned opulence to the colorful façade that contrasts with the surrounding square, The Winter Palace has been a St. Petersburg icon since it was constructed in the 1700s for the imperial family. Today, it is also home to the Hermitage Museum, which houses one of the most impressive art collections in the world.

Who doesn't love the idea of taking a break from the daily routine, checking into a top-tier hotel, and unwinding in new place? These five one-of-a-kind hotels each offer insane 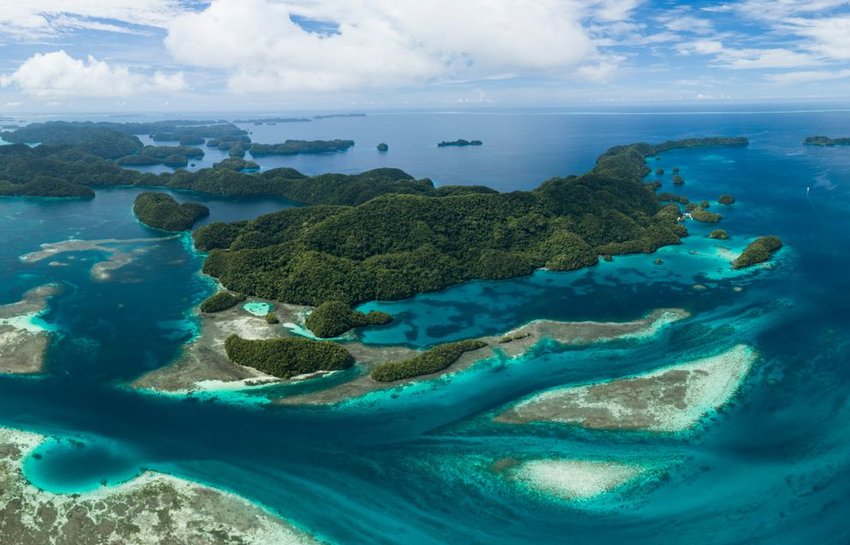 If you're from one of the five countries that still uses the Fahrenheit scale, you know how confusing it can be to convert from Celsius when you travel. The largest