For as long as humans have existed, we've been fascinated by the night sky. But with the rise of modern conveniences comes the rise of something slightly less pleasant: light pollution. Over 60 percent of Americans can no longer see the Milky Way from their homes, and research has begun to show that light pollution causes an increase in depression and insomnia. In much the same way as they preserve wildlife habitats, scientists are now attempting to preserve the night sky. If you want to escape the city and see the sky as it was meant to be seen, here are five stunning places protected by the International Dark Sky Association.

Located on the Great Salt Lake, Antelope Island State Park encompasses 28,800 acres. It offers incredible, unobstructed views of the night sky. Before it became a state park, this land was used by Mormon pioneers as a ranch area during the 1800s. It became a state park in the 1980s and was particularly treasured because the landscape had never been damaged or altered.

Sometimes, even relatively rural night skies can be compromised by the light from a nearby city. But that isn't the case with most of this park. Due to its island location, the western half of the park offers views of the sky that are untouched by artificial light. It is worth noting, though, that you should stay on the western side if you want to see a pristine sky. The eastern half of the island faces a major metropolitan area.

This park is a popular vacation spot, offering beautiful beaches, lots of wildlife, and a quiet place to get away. If you visit, you're sure to run into other stargazers who love the night sky just as much as you.

If you're more into camping than beaches, Dead Horse Point State Park might be right up your alley. According to legend, this desert park gets its name from its former use as a corral by 19th-century cowboys. While it isn't home to a great deal of wildlife, the park does offer a group campsite. You can also choose one of the numerous individual campsites if you'd rather enjoy the stars undisturbed. Enjoy the picnic area and a nine-mile hiking trail, too. If you're looking to camp at several different locations, this park is conveniently close to Canyonlands National Park, another Dark Sky Park with beautiful nighttime views.

Of course, once you camp at Dead Horse Point, you might just want to stay. This park's high elevation and significant distance from major metropolitan areas make it a perfect place for anyone who wants a panoramic view of the stars. Rangers offer frequent programs for campers, including full moon hikes, star parties, and junior astronomer nights geared at children under 12. Movie buffs might also get a kick out of visiting this area: the park was used to shoot the iconic final scene from the movie Thelma and Louise.

While the majority of pristine night sky views are in the middle of the country, the midwest can't hog all the fun. This preserve, located in the south of Florida, is surrounded by various state lands and the Everglades National Park. It is the first National Park Service area east of Colorado to be certified by the International Dark Sky Association.

This area is not for the faint of heart. It is a preserve, not a park, so it is home to a wide variety of wild animals. This list includes venomous snakes, panthers, and black bears. With that being said, there are plenty of reasons to visit this beautiful area. It features eight campgrounds, scenic driving routes, and canoe trips. The preserve offers various guided tours and events, and you can get an off-roading permit to drive through the areas of the preserve that are difficult to reach on foot. For the truly outdoorsy, Big Cypress is an incredible place for an adventure. While it does suffer from slight Miami light pollution, this southern preserve is home to some of the last dark sky in Florida.

Goblin Valley State Park gets its name from the striking sandstone rock towers scattered across its landscape. These towers are called hoodoos, but they are locally referred to as "goblins." They lend a magical, otherworldly atmosphere to the area. Some of the goblins tower above the landscape at over 10 feet tall.

If you want to see the stunningly pristine night sky without a crowd, this is the perfect park for you. It is close to several incredibly popular Dark Sky Parks, but it draws fewer visitors. This means that you get the same beautiful skies and fun events but in a much quieter, more intimate setting. Goblin Valley State Park is an enchanting, lesser-known park that will not disappoint.

Just this year, the Grand Canyon National Park was officially certified as an International Dark Sky Park — a process that took three years and involved the park converting most of its light fixtures to make them less obtrusive. This means that, rather than having open lights that create a glare, the park has installed fixtures to direct the light downward. The modifications allow visitors to see where they're going without obscuring the night sky.

The National Park Service has made it clear for years that visitors should try to experience the park at night. Grand Canyon National Park is spread out across over one million acres, and it offers stunning views of the Milky Way. The park also occasionally offers "star parties," where amateur astronomers gather to stargaze. During these events, park rangers provide constellation tours and astronomy slideshows. Also, you can attend various presentations and night sky photography workshops. The Grand Canyon National Park is truly committed to preserving the pristine night sky and giving its visitors the best experience possible. 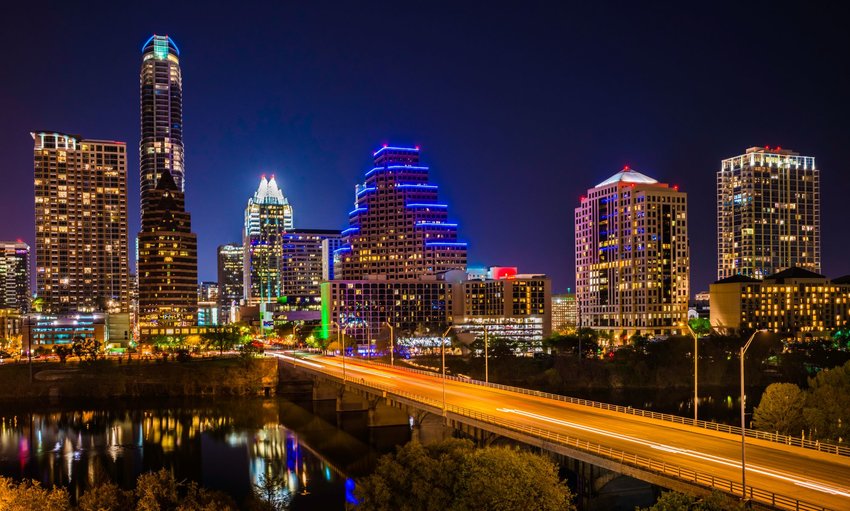 Even if you've never been to Austin, Texas, you may have heard it referred to as the live music capital of the world. You might also know about Austin's great

Earth is about 70% water, according to the United States Geological Survey. While the oceans contain an incredible 96.5% of all the liquid water found on the planet, lakes,