Built between A.D. 532 and 537, the oldest intact church stands in Istanbul, Turkey, where the revered structure has served a variety of denominations. For centuries, Hagia Sophia was the largest holy building in the world. Here are five churches that meet or exceed its size.

National Basilica of the Sacred Heart

With its terra cotta walls and brilliant green copper dome, the 292-foot-tall National Basilica of the Sacred Heart dominates the skyline on the outskirts of Brussels, Belgium.

Construction of this massive Art Deco masterpiece began in 1905 but was not completed until many decades later. The first stone was ceremoniously laid by King Leopold II to commemorate 75 years of Belgian independence. By the time World War I broke out, only the foundation of the basilica was completed. Construction resumed in the wake of the war but stopped when Europe was once again besieged by World War II. The 540-foot-long facility was finally completed in 1969.

Cathedral Basilica of the National Shrine of Our Lady Aparecida

Not only is Brazil the largest Catholic country on earth, but it's also home to one of the biggest churches in the world. Consecrated by Pope John Paul II in 1980, the Cathedral Basilica of the National Shrine of Our Lady Aparecida sits on the site of a wooden church that was built by faithful fishermen in the early 1700s.

According to local legend, the first chapel at the site was inspired when a luckless fisherman pulled a headless wooden statue of the Virgin Mary from the waters of the Paraiba River. Shortly thereafter, the head was retrieved. Once the pieces were reunited, the fisherman's luck changed, and he brought in a massive haul of fish to celebrate the arrival of the governor.

After word got out about the miraculous catch, the faithful flocked to get a glimpse the statue. By the mid-1800s, the chapel could no longer accommodate the influx of visitors, and a larger chapel was completed in 1888, explains the Vatican News.

In 1904, the 15-inch-tall statue of the Virgin Mary was crowned by decree of Pope Pius X. Twenty-six years later, Lady Aparecida was named the patron saint of Brazil. Today, the modern basilica named in her honor boasts a 230-foot-tall dome and can hold up to 70,000 worshipers.

Basilica of the Sacred Heart at Notre Dame University

The church that started as a log cabin on the banks of the St. Mary's Lake in Indiana now stands as the largest on-campus chapel in America. After French missionaries intent on converting local natives were expelled from the region, the cabin and property was entrusted to the care of a Catholic leader by the name of Edward Sorin who went on to found Notre Dame University in conjunction with the Brothers of the Holy Cross. Religious services continued at the cabin until a larger facility was erected in the 1840s.

In 1869, architect Patrick Keely was contracted to draw plans for a new church. When his estimated building price was deemed too outlandish, a different architect was hired. The Gothic Revival style church was built at the cost of around $8,000. A pipe organ was installed, and the sanctuary became a consecrated Catholic church in the summer of 1888.

In 1931, significant renovations were done under the watchful eye of New York architect Wilfred Anthony. In the late 1960s, more renovations were done at the behest of the Vatican. Twenty-something years later, 116 French stained glass windows were installed. Today, the Basilica of the Sacred Heart stands 275 feet long by 114 feet wide and boasts three altars and 23 bells in its 218-foot tall belfry.

Liverpool, England, isn't just the birthplace of The Beatles. This town on the east side of the River Mersey also boasts the biggest church in the United Kingdom. Based on the second design submitted by architect Giles Gilbert Scott, Liverpool Cathedral underwent construction between 1904 and 1978, explains Earth & World magazine.

In addition to being the longest church on earth, Liverpool Cathedral is home to the highest and heaviest peal of bells ever built. Credit for the massive bell collection goes to a local businessman, Thomas Bartlett. When Bartlett died in 1912, he bequeathed funds to the church with the stipulation that his ashes be interred in the belfry upon completion. Many years later, his wishes were realized.

All told, there are 13 enormous bells weighing more than 16 tons hanging in the tower at Liverpool Cathedral. Each massive bell has a name and is inscribed with a bible verse. The heaviest bell, known to parishioners as "Great George," weighs in at a whopping four tons and is so massive, it cannot be swung.

Over the years, the bells at Liverpool Cathedral have been called into play to break world records and deliver modern music, including a chiming rendition of the John Lennon song "Imagine," in 2008.

With interior space that exceeds 163,000 square feet, St. Peter's Basilica in Vatican City is by far the largest church on earth. Construction of the monumental church began at the behest of Pope Julius II in the 16th century, and the building was consecrated a century later under the aegis of Pope Paul V.

Viewed from the air, St. Peters Basilica appears to be cross-shaped. Numerous chapels, altars, and graves sit beneath the dome, including the final resting places of Holy Roman Emperor Otto and martyred Saint Peter.

Perhaps the most famous rooms in St. Peter's Basilica is the Sistine Chapel. Lined with frescoes dating back to the 15th century, the chapel boasts astonishing artworks by such masters as Sandro Botticelli, Pietro Perugino, and Michelangelo. 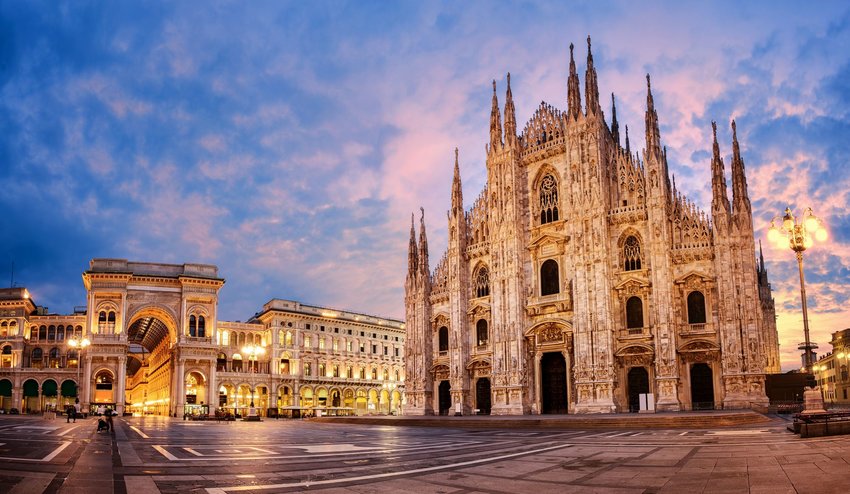 Texas is home to a unique and diverse culture—and some straight-up weird things.