Geology may sound boring on the surface, but when you set eyes on these incredible rock formations, you may find them anything but dull. Passionate rock lovers from around the world plan vacations to see some of the country’s strangest landscapes. Many of the most spectacular formations are in the West, where the mountains and canyons are younger haven’t been softened by erosion and age. These craggy profiles and volcanic monoliths have intrigued humans for millennia. Rock on with these 10 unusual rock formations below, from Arches National Park to the Oregon coastline.

Delicate Arch, the most famous rock star in Arches National Park, is the largest free-standing example among the park’s 2000+ stone arches (and it can also be observed by taking a short, flat walk from the parking lot — another reason for its popularity). If you think Delicate Arch resembles a precarious drip castle at the beach, you probably won’t be surprised to hear that the sandstone region used to be underwater. This national park in eastern Utah offers visitors plenty of eye-popping arches in its array of spans, including Landscape Arch, a long narrow bridge spanning 306 feet (as long as a football field!).

Of course, the sandstone buttes, rock fins, and arches continue to be affected by the elements. In 2008, Wall Arch, in the area of the park known as the Devil’s Garden, collapsed in the night after standing stone still for millions of years. Who knows how many years, or millennia, Delicate Arch will hold its pose?

The Pacific coastline is perforated with wave-bound formations called sea stacks, the result of a lava flow 15 million years ago, and then left behind as the land was worn back by the relentless churn of the surf. Of these leftover rocks, Haystack Rock, just off Oregon’s Cannon Beach, is perhaps the most well known and most photographed. (The basalt even played a prominent role in the 1985 movie The Goonies.)

Though Haystack Rock is a protected part of the Oregon Islands National Wildlife Refuge and Marine Garden, beachgoers can walk out to it at low tide to see the sea urchins, anemones, limpets, and sea stars that live in its tide pools. Be sure and check a tide chart  before you go, though,, so you can avoid having to be rescued by the Coast Guard.

Fans of the 1977 film Close Encounters of the Third Kind may recognize Devil’s Tower as the model for the sculpture carved from mashed potatoes at the dinner table or as the site of the movie’s alien encounter. About 5,000 rock climbers a year from all over the world head to northeastern Wyoming to scale the tower, using its vertical grooves and hexagonal columns following one of the 134 routes to the top.

While the astonishing igneous monolith (formed from hardened magma) erupts from the surrounding plains and rises straight up some 867 feet from its base, its dramatic formation is hardly satanic. Its name is thought to have been merely a bad translation of the name used by the local Black Hills tribes, which was “Bear Lodge” or the “Place Where the Bears Live.”

This man-made art installation — a group of exuberantly painted rock totems rising from the stark desert — catches the eye of visitors headed south out of Las Vegas. The site-specific artwork, commissioned from Swiss artist Ugo Rondinone, was erected in 2016 and scheduled to be taken down two years later. But it has so delighted visitors that its stay has been extended through at least the end of 2021.

The artist stacked local boulders into seven cairn-like towers that range between 30 to 35 feet tall, then painted each boulder a fluorescent color, resulting in a stunning array that has become a favorite backdrop for Instagram selfies. The artwork provides a medium point between the natural beauty of the surrounding desert and the artificial splendor found in Las Vegas.

This weird formation rising above the surrounding prairie was a welcome sight to pioneers making their way west, marking the western edge of Nebraska, where they’d finally leave one more state behind them. Three of the famous seven trails west — the Mormon, the Oregon, and the California trails — passed Chimney Rock. Its spire, which has diminished in height due to erosion and lightning strikes since the 19th century, was visible from 30 miles away on a clear day. Today, it still towers 300 feet over the prairie.

Providing a dramatic craggy backdrop for many a cinematic Western , Monument Valley runs along the border of Utah and Arizona, within the 26,000-square miles of the Navajo tribal park, or Navajo Nation. U.S. Highway 163, rightly designated a scenic byway, barrels right through the center of a collection of red rock buttes and spires that can still inspire a lonesome yodel. The names of the formations have lots of Wild West flavor: Grey Whiskers, the Totem Pole, the Sentinel, and the matching Left and Right Mitten Buttes, which the Navajo believe represent the hands of the Creator. Director John Ford shot seven westerns here, most starring John Wayne, including The Searchers (1956), in which the landscape played a featured role. He even has a spot in the valley named after him: John Ford’s Point.

Between Monument Valley and the Grand Canyon, Antelope Canyon is a mesmerizing slot canyon, carved from red sandstone by seasonal rains of centuries. Slot canyons are steep-walled, deep ravines that serve as channels for floodwaters after rains. Narrow passages lit by intense shafts of desert sunlight make a guided walk through the upper and lower canyons an almost psychedelic experience. (And since Antelope Canyon is on the Navajo tribal lands, the only way to visit is by hiring a guide.)

Touring the canyon and adding photos of the undulating vermilion walls to your feed has become de rigeur for Instagram users. And images of the canyon have become so familiar (through its appearance in a Britney Spears video and as a Microsoft Windows screensaver) that Glossier recreated its curvaceous walls in its Los Angeles showroom.

You’ll find spectacular red rock buttes like those in Sedona all over the southwest, but these particular rocks have something that sets them apart: mystical vortexes. The Sedona region —  with relatively mild temperatures for a desert, natural springs, and lots of green hills — has been visited by humans since 11,000 BCE, but it wasn’t until the 1980s, when New Age practitioners arrived, that it became a mecca for spiritual seekers. The vortexes were revealed to a psychic, Page Bryant, in a vision as local sites where the energy of the spiritual world is easiest to access. These vortex sites attract hopeful visitors who meditate, practice yoga, or play pan flute, in hopes of conducting the healing, positive energy into their own bodies.

The undeniably beautiful area has also attracted lots of artists, hoteliers, and a spirituality industrial complex, selling crystals, vortex-related tours, healing oils, sage smudge sticks, and other totems of well-being. A visit to this region of scarlet rocks —  especially in the early spring when the desert is in bloom —  is recommended even for skeptics.

The Hoodoos of Bryce Canyon, Utah

These knobby, colorful columns of red rock are just as weird as their name: hoodoos. Though hoodoos are not unique to Bryce Canyon — you’ll find them in the Badlands of South Dakota, for instance — the height (up to 150 feet), the vivid colors of the Utah variety, and the fact that Bryce has the most hoodoos in the world make these formations particularly remarkable to behold. The irregular shapes and markings of the hoodoos are created by a number of factors: the repeated frost cycles soften the mudstone part of columns, causing it to melt and paint colors. The areas where the rock has melted over the years becomes the narrow part of the hoodoos. Then, the frost and snowmelt wedge into fissures in the rocks and then expand and contract with the cold, causing chunks to break off the column and fall.

For the best experience of this eerie geological landscape, visit during the annual June Astronomy Festival when Bryce, designated an International Dark Sky Park, studies and celebrates the formations backlit by the Milky Way and clear night skies. 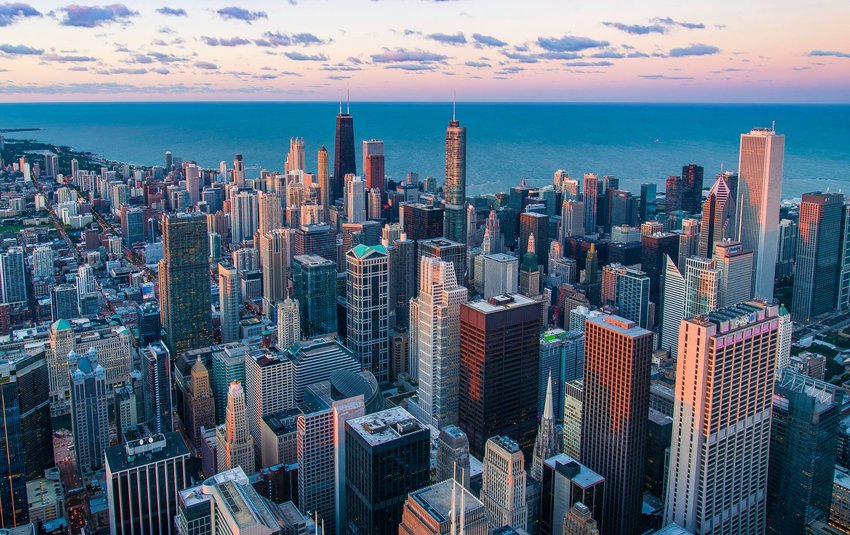 From the Big Apple to Beantown to Sin City, many of these beloved city nicknames have taken on a life of their own. But their origins are often surprising — learn where five of the most iconic U.S. city nicknames originated. 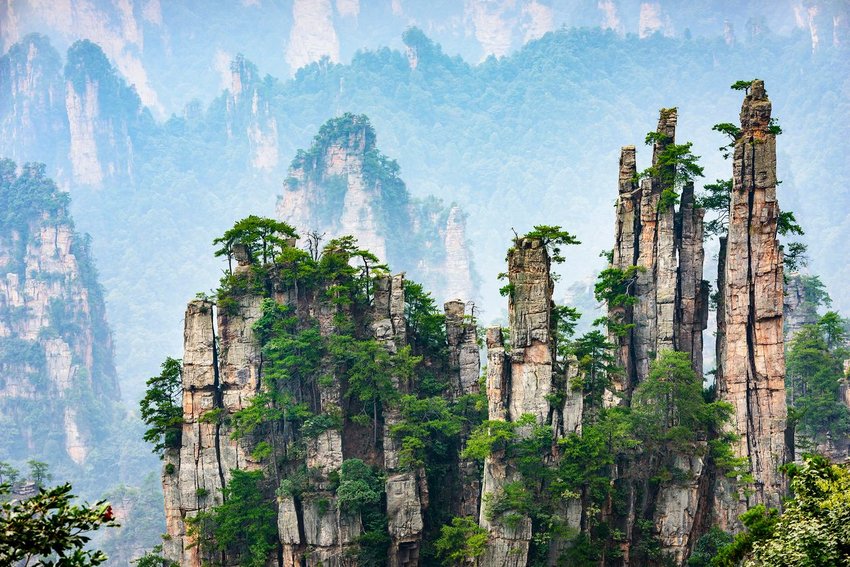 It isn’t exactly a spoiler to say that most movies aren’t filmed where they’re set. As you’re waiting to plan your next trip, here are five movies with surprising filming locations to watch in the meantime.