Trees are remarkable living things. Not only do they provide shade, oxygen, and often fruit, but they can also live remarkably long — the oldest tree in the world is a 4,845-year-old pine in California with the appropriate nickname of Methuselah. However, it's not the only tree to earn well-deserved recognition. Here are five other famous trees you can visit around the world.

The Boab Prison Tree was an important cultural site for native Aborigines. There's debate, however, as to what they actually used it for. Some people say the tree served as a pilgrimage site or meeting place for gatherings. The boab tree has a hollow, bulbous trunk that's over 45 feet in width. It has an opening in the middle that allows entrance. The baobab earned its nickname as a "prison tree" due to stories of Aborigines held captive inside as they awaited prison transfers.

However, this particular boab tree may not deserve its nickname. Researchers interviewed by "ABC News" in Australia maintain there's no evidence this particular tree served as a prison, although other boab trees in the region did. So, it's highly disputed that the tree actually served as a holding cell of sorts. What it does do is serve as a reminder of Derby's settlement. The discovery of bones in the tree also highlights its significance as an Aboriginal burial site. So, while the Prison Tree may be a misnomer, it's still an important symbol of Australia's past and is well worth a visit.

This tree isn't the oldest one on this list, but it may have one of the world's most spellbinding stories – it's said to have once sheltered the legendary Robin Hood and his band of Merry Men. (Whether that's actually true is up for debate.) However, there's no denying that this tree is a magnificent landscape feature. It's estimated to weigh over 50,000 pounds with a width of nearly 100 feet.

The tree got its name after making an appearance in a book written by Major Heyman Rooke in 1790. After the book made its debut, people started calling the tree The Major's Oak, which was later abbreviated to Major Oak. You can visit the tree in Sherwood Forest, but you won't be able to get too close. To help preserve the tree's delicate ecosystem, caretakers erected fences around it to prevent visitors from compacting the soil and reducing the air space surrounding the roots. Reduced air capacity can lead to stressed roots, defoliation, and the eventual demise of the tree. There are plenty of other ways to celebrate this fantastic tree, so if you're planning to visit, be sure to check out the Major Oak Woodland and Robin Hood Festivals.

Generally, we identify a tree's age through carbon dating or by counting its growth rings. Part of what makes the Jaya Sri Maha Bodhi unique is that there's a written record about when, why, and who planted it.

This ancient fig tree sits in the temple courtyard of a royal park in the city of Anuradhapura, Sri Lanka. According to historians, King Devanampiya Tissa planted it there during a great ceremony in 236 B.C. The sapling he planted that day supposedly came from a tree the Buddha sat under when he achieved an enlightened state. As the story goes, Queen Thishyarakkha destroyed that original tree, viewing it as an affront to her own religion. Saplings grew from the hewn tree, however, and the king managed to save one. This sapling grew into the Jaya Sri Maha Bodhi tree we know today.

Buddha's followers have stepped in to protect the tree several times during its life, even resorting to measures like lighting fires near its base to keep elephants from devouring its leaves. The tree is still a sacred site for Buddhists today, who come from all over the world to pray for healing, ample rice harvests, and safe births.

This yew tree in Ashbrittle village is supposedly the oldest living thing in England. Researchers estimate it to be over 4,000 years old – meaning it was already mature when Stonehenge was under construction. There was a brief scare, however, about the tree's health.

In 2015, concerned volunteers who tended to the tree thought that several of its branches looked sickly. It led them to wonder if the 38-foot wide tree was in its final years. However, according to tree experts, it's not uncommon for yew trees to have a few bad years before perking up again.

While the tree sits next to a Christian church, it may have once served as an important ritual site for Druids. Christians unknowingly built the church on the site of a Druidic stone circle, which is a standing stone monument similar to the ones at Stonehenge. As the story goes, the tree is located on a battlefield, where the Romans and Celts once fought. After the battle, the heads of dead Roman soldiers were buried under the tree along with the body of a local chieftain.

The Druids saw yew trees as a symbol of life and death, believing the trees possessed immortal souls. Whether you believe the supernatural claims about the Ashbrittle Yew or not, it may just outlive the stone buildings surrounding it.

General Sherman might possibly be the most famous tree in the world. While the age of the tree is impressive (likely to be around 2,000 years old), it's actually the size of the tree that brings it fame. General Sherman is 275 feet tall and 36 feet wide in diameter, making it the biggest tree in the world. The tree sits in the Giant Forest of Sequoia National Park in California, where thousands of visitors flock every year. Fences around the tree keep visitors from trampling on the shallow roots. Visit California reminds visitors that General Sherman is still growing, so it's anyone's guess how big it will eventually get. 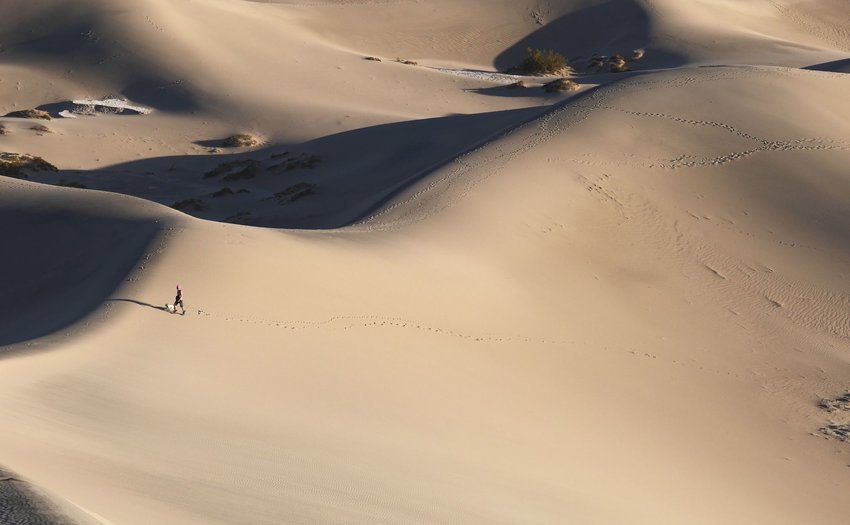 Death Valley is more than just a hot desert. Find out more about this unique national park from these interesting facts you probably didn't know.